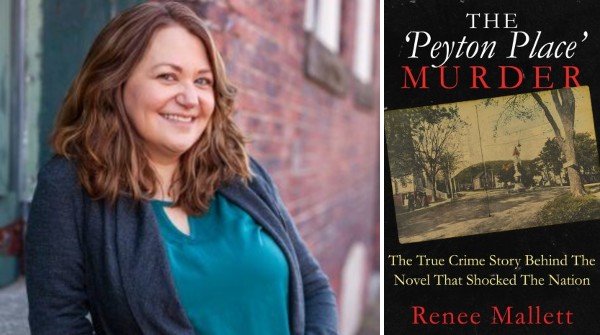 Grace Metalious, born and raised in Manchester, New Hampshire, came from humble beginnings. A former mill worker, mother of three, and school principal’s wife, she would shock the nation in 1956 with the publication of Peyton Place, her first novel about a murder in a small town.

Quickly becoming the best-selling book of its time, the sexually-charged book spawned sequels, two Hollywood movies, and a long-running television series on ABC starring Mia Farrow and Ryan O’Neal. It also made Metalious a pariah in the town where she lived, and tabloid fodder for years, ultimately leading to her untimely death at the age of 39.

Unknown to most readers, behind the fictional story about the lives and scandals of residents of a small New England town Metalious called Peyton Place, lay a dark secret based on fact. The story was, in part, inspired by a true life crime known in the press as “The Sheep Pen Murder,” which took place in Gilmanton, New Hampshire in the late 1940s.

In THE ‘PEYTON PLACE’ MURDER: The True Crime Story Behind The Novel That Shocked The Nation historian Renee Mallett skillfully weaves together the lives of Metalious and Barbara Roberts, the confessed killer behind The Sheep Pen Murder. In her book, Mallett shines a new light on the inspiration behind the shocking best-selling novel and explores what happens when true crime and literature meet.