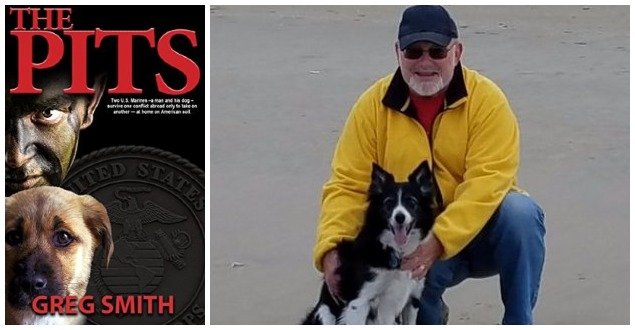 CRIME FICTION – After nearly 20 years serving in the Marine Corps, Captain Kramer thought he’d been prepared for anything life had to throw him. He returns from deployment to Afghanistan with a new dog, Shadow. Back in Oceanside, California he and Shadow are drawn into a struggle to oust local gangs involved in a bloody sport. Kramer and Shadow’s activities capture the attention of the FBI who quickly enlist their help in an operation to bring down a major crime lord based in Florida. Captain Kramer, USMC and Corporal Shadow, USMC soon find themselves in their deadliest fight ever.

Of all the crimes to receive major focus in literary thrillers, the one depicted in this book has to be one of the rarest. Even more rare are stories that feature dogs as major characters without resorting to an overabundance of predictable slapstick humor. This novel, THE PITS, certainly features its fair range of emotions, but for the most part it is thrilling, suspenseful, and very serious.
I have never read a book that so brilliantly captured an animal’s legitimate role in certain dangerous situations. A well-trained canine in the field, for a variety of different jobs, is priceless, and Smith (clearly another dog lover) is able to capture that undeniable fact in brilliant prose.
Although Corporal Shadow, USMC, is a somewhat personified character, he still reads as an authentic trained pooch. Captain Kramer, USMC, also has an air of legitimacy about him, sharing a number of personality traits with real men his age who have seen military action. These characterizations give the novel a distinct air of credibility, portraying author Greg Smith as a man who is either highly knowledgeable or who certainly does his research — or both.
Smith intended for the relationship between Kramer and Shadow to be one of intense love and trust. I cannot stress how much that relationship highlighted how horrible the abuse these dogs forced to fight experienced. This novel had the ability to shock me with the amount of detail provided about the abuses these animals were forced to endure. The amount of effort placed in raising awareness in this novel has to be acknowledged.
THE PITS handles a sensitive topic in a very inspiring way, with an interesting story line full of twist and discoveries. I recommend this novel and give it 4 out of 4 stars. If you have ever loved a dog, or any animal for that matter, then you will understand and appreciate Captain Kramer’s dedication to fight for the animals he loves.
If you love a good action/adventure book where the hero has a righteous cause, you’ll love The Pits by Greg Smith and you’ll be excited to know that the ending hints at a second book. He is also keen to use most of the sales from his books to helping animal shelters.
Available on Amazon

“A Touching and Intense Adventure”

I was instantly intrigued by the cover of this book, considering that the title, the soldier, and the picture of the dog’s eyes don’t really make a lot of sense when you first see it. I was intrigued enough to dig a bit deeper and see what the story was, and the synopsis sold me immediately. I am a dog lover, always have been, always will be, and have known a number of service dogs, firedogs, etc. over the course of my life. I have never read a book that so brilliantly captured an animal’s legitimate role in certain dangerous situations. A well-trained canine in the field, for a variety of different jobs, is priceless, and Smith (clearly another dog lover) is able to capture that undeniable fact in brilliant prose.

The story is riveting and gripping in a way that I love, but it wasn’t exhausting. In other words, i felt like I could reach certain points and just want to enjoy what I’d read, rather than pushing forward. There were a few moments where the plot faltered, or seemed to get a bit too “over the top action hero”, but all in all, it was a tremendously inspiring and enjoyable book. May we all be so lucky to be protected and defended by this type of loyalty, both from the people we trust to keep us safe, and in the animals we love to be there when we need them. What a great novel….

The advent of retirement opened a whole new world to me and now that it has come to pass, I am turning my artistic bent from graphic design and illustration to that of writing.

The Kramer and Shadow series is an action, adventure, crime thriller series that encompasses the world and has our two Marines fighting hard against organized crime at many levels – but always involving do-or-die confrontations.

My hope is to establish a fan base for my writing so that my readers can have an active role in helping me grow and develop as an author in the years to come. I invite you to join me in this adventure.