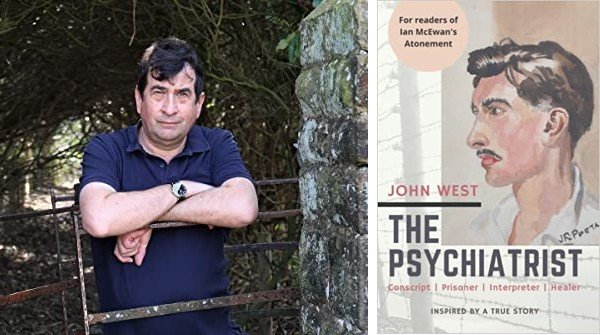 Eric West wanted to put World War II behind him.

Eric West wanted to put World War II behind him.

He wanted to blank out the horror of that journey to a POW camp deep in the heart of Eastern Europe and the subsequent four years of his life where, along with other Dunkirk veterans, he was incarcerated and brutally used as a forced slave labourer for the Third Reich.

He never spoke about his Long March Home in the winter of 1945.

So why, in the 1980s, after a lifetime of helping and healing others, did the psychiatrist, Dr Eric West, decide to revisit the scenes of his worst nightmares?

John West is a Physician living in Yorkshire, UK and a first-time author.

His novel ‘The Psychiatrist’ was inspired by his father’s emotional journey from his teenage years until his final years of life as a cancer patient. John explores the effect of his father’s five years as a POW from 1940-45 that left lasting scars, not just on him but also on all those who loved him. The novel goes on to explore his post-war career as a Psychiatrist, possibly paying back a debt of survivor guilt.

Much of the background had to be sourced afresh from original research, and involved pilgrimages to the battlefields around Dunkirk as well as the POW camps and mining sites of Silesia, now in modern-day Poland.

John has brought his father’s story to life with relevance to anyone affected by major life stress. A message of hope and reconciliation runs through the book.