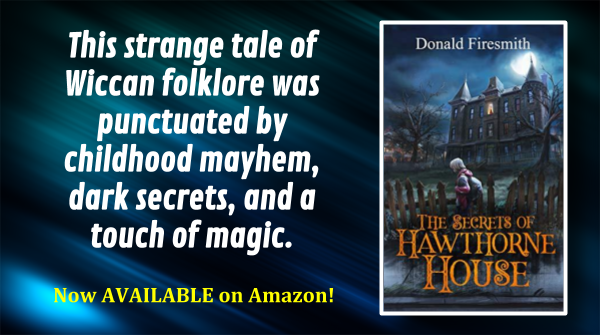 The Secrets of Hawthorne House by Donald Firesmith

Fifteen-year-old Matt Mitchell was having the worst summer imaginable. His misery started when his mother died in a senseless car accident. Matt’s grieving father, unable to remain in the family’s seaside cottage, moved Matt and his twin sister as far as possible from the ocean they loved.

But their relocation to the small town of Hawthorne, Indiana only made Matt’s life more difficult. Three bullies at his new high school dedicated themselves to making him miserable. To top it off, Matt heard that the recluse living in the dilapidated Victorian mansion next door was none other than Old Lady Hawthorne, the town’s infamous witch and murderer of wayward husbands.

Then, Old Lady Hawthorne’s niece and her three children moved in next door, and something extraordinary happened. Matt met Gerallt, the strange boy destined to become his best friend. And when Matt learned the Hawthornes’ family secret, it changed his life forever.

The Secrets of Hawthorne House is the story of an unlikely friendship, the clash of two radically different cultures, hidden magic, and a search for the lost Hawthorne treasure.


Just finished The Secrets of Hawthorne House by Donald Firesmith. I understand there is a sequel on the way. Very happy about that! All I can say is that I want to be adopted by these lovely folks.

After Matt’s mother is killed in an auto accident, his father moves him and his sister to a small mid-western town. Matt does not feel like he fits in with kids his age and immediately becomes a target for three mean bullies in his class.

His new home is nextdoor to a huge dilapidated mansion inhabited a woman other kids say is a witch. Short of cash and with no allowance currently available, his father encourages him to find work in the neighborhood, suggesting that he check with the lady nextdoor to see if he can mow the long overgrown lawn. He works hard for her and a relationship begins to build. When school starts, Matt finds that he is in the same grade with her great nephew Gerallt who has come to live in the mansion. As time passes, they become best friends.

The bullies target them both, but odd things begin to happen to the three bullies. In one incident when the bullies are about to beat up on Matt, Gerallt shows up and so does a flock of sea gulls who poopon the heads of the bullies until they run away. Of course, that makes things even worse as you might imagine. Chaos follows. But having a best friend who seems to know magic really helps. Matt eventually gets Gerallt to tell him about it. He explains it is not magic, but the answer to his prayers to The Goddess of Celtic lore. And there is so much more to this intriguing story.

This is a very entertaining book and quite original. Just waiting for the sequel now.

A computer geek by day, Donald Firesmith works as a system and software engineer helping the US Government acquire large, complex software-intensive systems. In this guise, he has authored seven technical books, written numerous software- and system-related articles and papers, and spoken at more conferences than he can possibly remember. He is also proud to have been named a Distinguished Engineer by the Association of Computing Machinery, although his pride is tempered somewhat worrying whether the term “distinguished” makes him sound more like a graybeard academic rather than an active engineer whose beard is still more red than gray.

By night and on weekends, his alter ego writes modern paranormal fantasy, apocalyptic science fiction, action and adventure novels and relaxes by handcrafting magic wands from various magical woods and mystical gemstones. His first foray into fiction is the book Magical Wands: A Cornucopia of Wand Lore written under the pen name Wolfrick Ignatius Feuerschmied. He lives in Crafton, Pennsylvania with his wife Becky, his son Dane, and varying numbers of dogs and cats.

Dear Reader, author’s recently published book “The Secrets of Hawthorne House by Donald Firesmith” is now available on leading bookstores, get your copy now and help the author by writing a review of the book.
Available on leading Bookstores