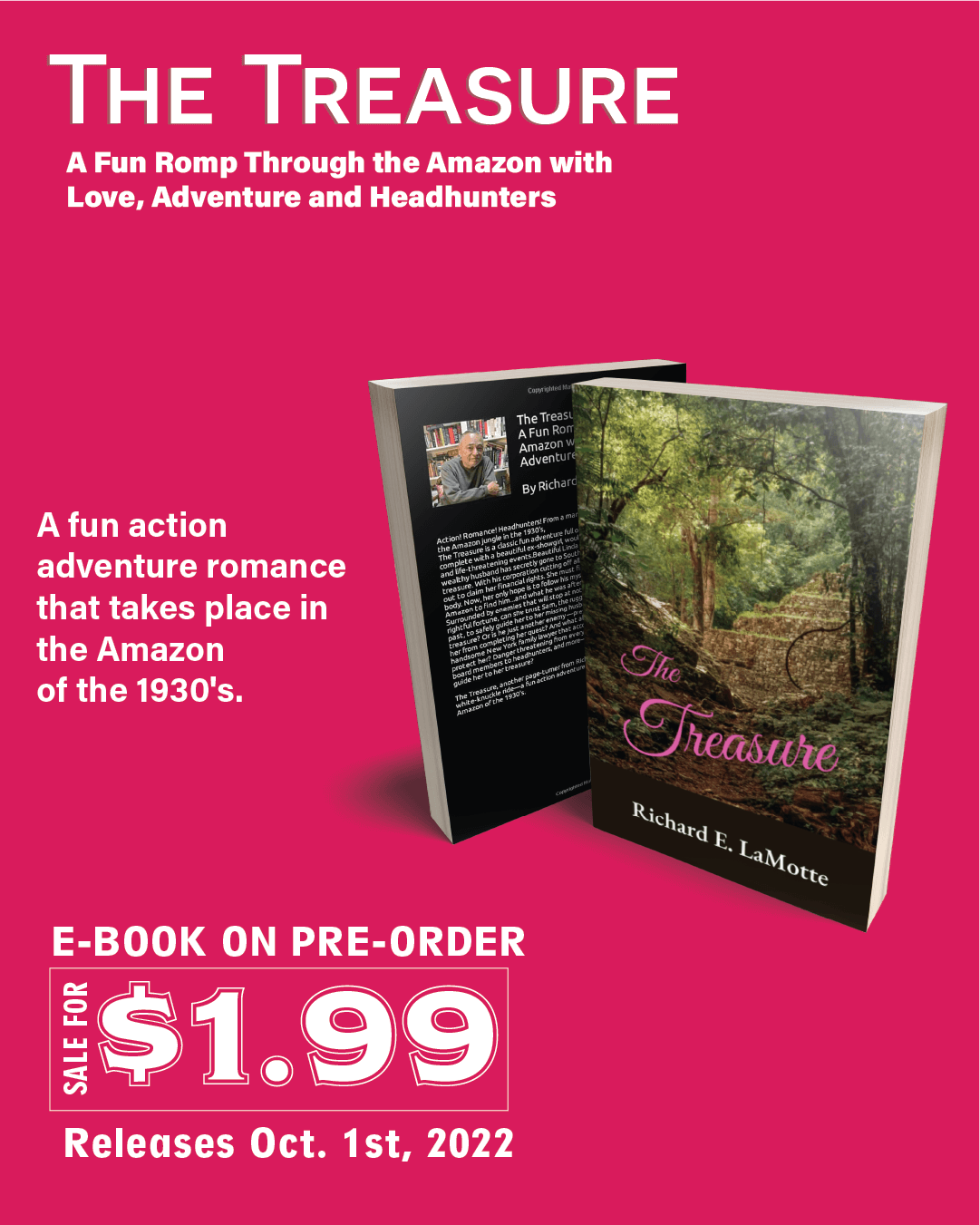 A Fun Romp Through the Amazon with Love, Adventure, and Headhunters

Action! Romance! Headhunters! From a mansion in New York to dangers in the Amazon jungle in the 1930’s, The Treasure is a classic fun adventure full of unexpected twists and turns, complete with a beautiful ex-showgirl, would-be heroes, ever-present villains, and life-threatening events.

Beautiful Linda Dawson, discovers that her older wealthy husband has secretly gone to South America to find a fabulous treasure. With his corporation cutting off all funds to her, her time is running out to claim her financial rights. She must find her lost husband…or his dead body. Now, her only hope is to follow his mysterious trail into the deadly Amazon to find him…and what he was after.
Surrounded by enemies that will stop at nothing to prevent her from her rightful fortune, can she trust Sam, the rugged former soldier with a clouded past, to safely guide her to her missing husband, or to his dead body, and her treasure? Or is he just another enemy —preying on her emotions, to prevent her from completing her quest? And what about Tom Jackman, the suave handsome New York family lawyer that accompanies her on her quest to protect her? Danger threatening from every side—from sinister corporation board members to headhunters, and more—will Linda’s secret be enough to guide her to her treasure?
The Treasure, another page-turner from Richard E. LaMotte, is a fast paced, white-knuckle ride—a fun action adventure romance that takes place in the Amazon of the 1930’s.

About the Author: Richard E LaMotte

Richard E. LaMotte is a novelist and influential seasoned writer of romantic action and suspense with historical elements like his new novel titled “The Song of Ramon and Maria,” was released in September 2022, and his subsequent title, “The Treasure,” both available on Amazon and fine online book sites with several new novels to follow.

Richard has always been an observer of people and loves stories; he enjoys romantic stories about history, suspense, mysterious and exotic places, danger, and adventure. Stories about behavior, motivation, self-realization, and self-deception – in other words, stories about us – us as humans. This passion resulted from when he joined the Marine Corps just out of high school.

This passion was born from working in the motion picture industry as a costume designer, art director, technical advisor, and director – traveling worldwide, and setting up departments in foreign countries. In addition, he enjoyed working with prominent Hollywood actors and actresses. The novelist, a unique storyteller, has worked in off-beaten places on six continents.

The Author is an avid history lover, reader, and researcher and a collector, artist, designer, and music lover. Most importantly, Richard is a Husband and Father. Full of wisdom from life’s experiences, Richard E. LaMotte brings all of his unique talents, keen eye, and sense of humor to his writing – both fiction and non-fiction. Now retired from the film and motion picture industry, Richard is devoting his time to his love of stories – writing adventures for avid readers of fiction. Rich and his beautiful wife Patricia reside in Valencia, California.