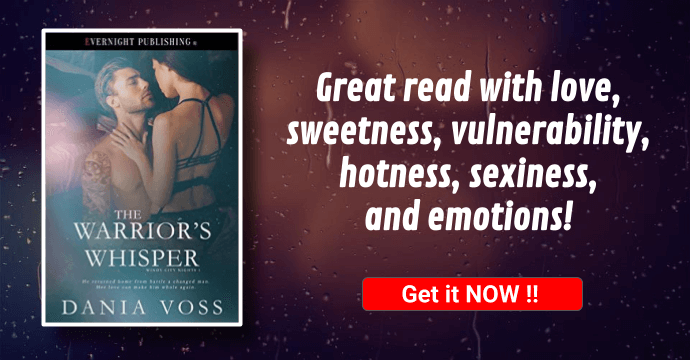 He returned home from battle a changed man. Her love can make him whole again.

To the outside world, Heath appears healed and integrated back into civilian life just fine after being injured in Afghanistan. But even though the battles are over, the scars, guilt, demons, and insecurities remain.

Leah has loved Heath all her life. He’s known her since the day she was born, seeing as he’s ten years older and her brother Jake’s best friend. Although he’s always regarded her as “family”, she believes they are meant to be together.

Heath has always considered Leah off limits, a forbidden temptation he shouldn’t want and can never have. But when he sees her at Jake’s wedding ceremony, he’s so overwhelmed he makes a move against his better judgment.

Still, his insecurities ultimately get the best of him. He believes she deserves more than a battle-weary Marine who suffers from combat nightmares.

Leah has a secret that will change their lives forever, but can Heath conquer his demons so they can make a way forward together—or will he abandon her when she needs him the most?
Available on Amazon Barnes & Noble Kobo Goodreads


I LOVED this book!! It was amazing!!! They made me angry, they made me cry, and they made me smile – the whole gambit of emotions….. their story is wonderful!! Can’t wait to see what Dania Voss has in store for the next Windy City Nights book!

Born in Rome, Italy and settled in the Chicagoland area, Dania Voss became a romance junkie in her teens. After decades of voracious reading and dreaming of one day writing her own romance novel, Dania decided to stop dreaming and take a chance on herself.

In November of 2017 she participated in NaNoWriMo for the first time, completing the challenge with over 75,000 written words. Those words became her first romance novel On the Ropes, the prequel in her Windy City Nights series.

When she’s not dreaming up adventures for future stories, Dania and her husband can be found getting into all kinds of mischief in and around Chicago.

Dania loves to hear from readers.

Keep up with her at: www.DaniaVoss.com

Visit her blog at: www.DaniaVoss.com/blog