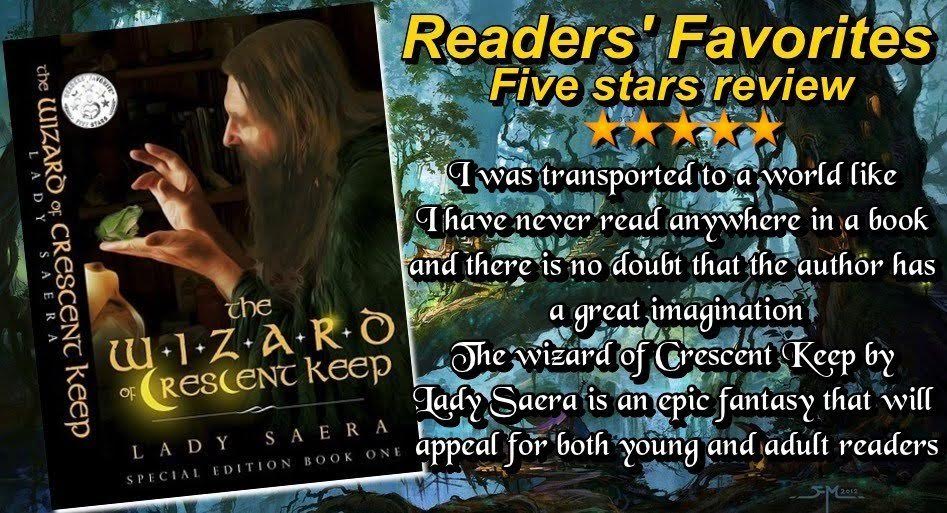 YA-Adult.
This is the Special Color Edition of The Wizard of Crescent Keep- The delightful story written by me, Lady Saera, only with color images, maps, artworks and icons. The black and white Edition sold here on Amazon won a five star review from Readers Favorite reviewer Romuald Dzemo in 2017. . .(This color edition includes color maps, illustrations and icons for my readers who persistently inquired about this, thank you so much.)
6×9
‘Readers Favorite Five Star Review’ of ‘The Wizard of Crescent Keep’
“The Wizard of Crescent Keep by Lady Saera is an epic fantasy that will have great appeal for both young and adult readers, a well-crafted tale of a powerful sorcerer caught up in a world filled with dangerous and wicked people. Things get even more complicated when the Wizard falls in love with a vampire and becomes caught up in a worrying dilemma: “Crescent wanted the evidence, but he also wanted to see her. He needed what would be called closure, as his grandparents would have put it.” This is a great story that is wonderfully written with awesome characters.

I was transported to a world like I have never read anywhere in a book and there is no doubt that the author has a great imagination. The setting is a magical world called Two Crescent Moons, a world where access is gained by falling through a Moons Light Portal. I loved the themes that are expertly woven into the fabric of the fast-paced and gripping plot, including love and friendship, adventure, romance, and the alluring power of magic.

The Wizard of Crescent Keep is a story that is fast-paced, woven with a complex plot and awesome characters. Crescent and Silwyna are my favorite characters and they play great roles in the conflict that has driven the plot all along. Lady Saera is gifted with beautiful prose and character development. I enjoyed the great descriptions and the natural-sounding dialogues. This is one of those books that make readers dream at night of places they have never seen and places they’d love to go. I can’t wait to read the follow-up on this one.”

‘A Fairy Tale for Everyone’Color Edition
‘THE WIZARD OF CRESCENT KEEP.’Special Color Edition all artworks maps and color icons.YA Teen to Adult~ As a grown man Crescent is Magician, Sorcerer, and Wizard on the Magical planet of ‘Two Crescent Moons’ where he learns to cope with some very strange and amazing characters and dreadful villains. Soon, being seduced by a beautiful Vampire isn’t the Wizard’s only problem.
A Magical Series of Adventure, Romance, and Sorcery.
As a youth, he knows right away that turning invisible isn’t normal, and wishes he could tell his best friend,but before he knows it on the fateful day he ends up falling through a Moons Light Portal, nothing in his life will ever be the same again.

Special first edition has Maps of the World of Two Crescent Moons, and Artworks.
Available on Amazon

Entertaining exciting and definitely not boring. Not the same old same old pattern in story lines, which was delightful. I enjoyed this all the way through! Love the Gothic touches and loved the characters. never knowing what would happen next. Unexpected treat, will read more on this series! A definite winner, with heart! Spice in it too, kept getting better and better!