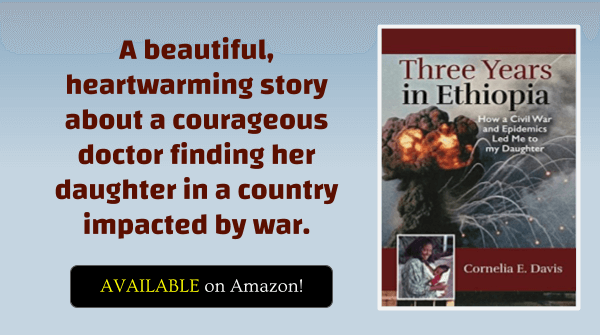 Sent by the World Health Organization to assist the Ethiopian government inpreventing meningitis outbreaks in 1990, Dr. Cornelia Davis eagerly accepted this posting. She headed to Addis Ababa, unaware of an obscure war that had gone on for two decades. The doctor had an ulterior motive — she wanted to adopt an infant girl. While providing expert assistance to control epidemics in several countries, Connie submitted her adoption application. Rebels captured previous strongholds of the Ethiopian government and the Prime Minister fled. Connie was left in charge of the WHO EPR Unit. The airport closed and the rebels entered the capital. In the midst of this chaos, Davis was approved to look for an orphan. You’ll be on the edge of your seat as you read about the explosive series of events which destroyed Connie’s house and led her to an infant girl found on the steps of St. George Cathedral. One look, and Connie knew she had found her daughter. Five days later, she was ordered by WHO to evacuate to Geneva. But not without her daughter!
Available on Amazon Barnes & Noble Kobo Goodreads