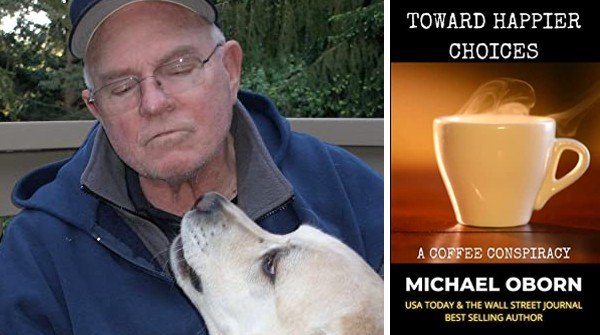 Choices? Everything we do is a choice. This book is a collection of challenges met, failures overcome, paths developed and happier results. This is an eclectic memoir showing in short stories and short essays how I overcame Mormonism and alcoholism. I show rather than tell how I managed to shake off the cultural thinking I was born into (the accident of birth) and liberated my thinking mindset for a happier life. It happened on several levels as I began to understand what Momonism had done to my mother and sisters. Today I appreciate women as equals. Past President Jimmy Carter said, “The abuse of women and girls is the most pervasive and unaddressed human rights violation on earth.”

How do we change habit thinking and use it to our advantage?

Some of the characters, names, incidents, locations, and events have been fictionalized for dramatization purposes. Any similarity to names, characterizations, or persons is entirely coincidental and unintentional.

About the Author: Michael Oborn

The Complete Mystery of Matthew Alcott has become a subject of heated debate and interest among angry Mormons, ex-Mormons, and religious scholars. Oborn’s book has been critiqued and reviewed on five continents.

A growing audience of interest is spreading though borderline church members in the 14,000,000 membership of The Church of Jesus Christ of Latter-Day Saints. Oborn has piqued the indignation of the Quorum of the Twelve Apostles In Salt Lake City for writing a suspense fiction using the cultural environment of Mormonism as the backdrop of his story just as Dan Brown did among the Cardinals of Rome with the Da Vinci Code.

Oborn served an honorable two-year mission for the Mormon Church. He is the son of a manager of The Deseret Industries, a non-profit church welfare organization.

A fascination with science and cultural anthropology, Oborn graduated from Weber State University and holds a title of Chemical Dependency Professional in the State of Washington.

Michael is a Chemical Dependency Professional works with addicts and their families. He is affiliated with SAFE CALL NOW, a nonprofit organization involved with police and firefighters. “Our first responders have the most difficult job in our society. As a result of the high stress and injury rates they have a suicide rate almost three times that of us, the citizen they protect and serve. Most of that number suffer the disease of addiction. Very few people realize this.”

If you like a writing style that takes three pages to discribe a doily look elsewhere. If you like Charles Bukowski, E. Annie Proulx, Craig Johnson, or Edward Abbey I’m your man. Mine has been called a Karate style.

I wanted to write a book that was entertaining, historically enlightening, and educational. I did so because so few non-Mormons really know what being a Mormon means. When people ask me at author readings for book clubs and book stores, “What is the strangest experience you have had when talking to people about your book, I have to say, People’s reactions.”

A non-Mormon will tell me something like, “I find this hard to believe.” An ex-Mormon, on the other hand, will hug me and exclaim, “You’ve made it understandable. I didn’t think anyone could.”

Non-Mormon’s have a hard time believing what it really means to be a Mormon.

I am a cancer survivor.

When my sweetheart was diagnosed with the ugly word, cancer, the three years that followed were a blue blur.

I remember words like endometrium and carcinoma. My first memory was surgery in which they took out pieces of her and discarded them. I remember the quilt group of women she belonged to that unanimously recommended, “get the spinal.” I remember in pre op the anesthesiologist, a lazy older dude that ignored the quilt groups advise when my back was turned. I remember her pain in post op and the looks I received when I spoke to the nurse in charge as said “do the spinal and do it now. I don’t care if it is post op.” They were smart and had another anesthesiologist do the procedure. I remember chemicals so toxic the nurses had to be careful handling it when they set up the I.V. that shot it into my sweetheart’s veins and arteries. I remember the day my sweetheart asked me to take my beard trimmer to her hair and how we wept as I sheered her head. I remember her donation of hats to the medical center when her hair started growing back, twelve in all. I remember sleeping in hospital rooms on chairs. I remember an overhead machine damn near the size of a Volkswagen that bombarded my wife’s stomach with something invisible called radiation. It was in a lead lined room with a twelve-inch thick door. I had to leave her lying on a cold slab under that Goddamn machine naked, cold, and alone. I remember diarrhea so fierce she was hospitalized for twelve days. I remember the doctor that insisted it was Crohn’s Disease. We lived with it for over a year with no relief before we went to a Naturopathic Doctor that said, “Let’s see what you are allergic to.” Sure enough the radiation that was pointed at the endometrium damaged the stomach also. The Naturopathic doctor with a suggested diet change gave us our lives back. It has been over six years now and we are good and I lived through it.

I have advice. For any who care to know when it gets serious and you are spending a lot of time with medical people take an advocate with you. At every stage have someone with you who represents you and if the doctor refuses to acknowledge them and or there questions fire the bastard and get a second opinion.

Michael states, “He is spoiled rotten by his sweetheart of 22 years.”

To Amazon and all my readers, many thinks.