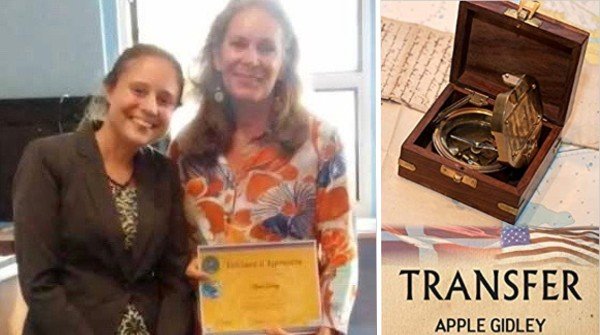 Transfer traces the lives of those on Anna’s Fancy, the Clausen estate on Saint Croix in the Danish West Indies, handed down through three generations. An historical novel and the sequel to Fireburn (OC Publishing 2017), Transfer sees Niels Clausen, the illegitimate child of a Danish landowner and his black mistress who both died as a result of the 1878 worker revolt, leave his adoptive mother’s sugar plantation and sail to England to continue his education.

With the help of Toby, a British aristocrat, Ivy, a lady’s maid turned lady and her botanist husband, Timothy, Niels challenges the perceptions on the streets of London of a black man at the turn of the 20th century. His development as a writer and political protagonist continues as he travels to Denmark and France where he meets up with childhood friends, Javier and Fabiana Gomez, before returning to Saint Croix.

The Danish West Indies face an uncertain future as the declining sugar industry lessens Denmark’s interest in their colonial outpost. Niels becomes increasingly involved in the future of the islands as war looms and concerns grow that Germany might covet a presence in the Caribbean. Will the islands’ security be guaranteed by the transfer of power to America?

The highs and lows of Niels’ life are punctuated by the crossing of oceans and cultures as well as the political manoeuvrings of a turbulent time in Europe, the United States and the Caribbean.