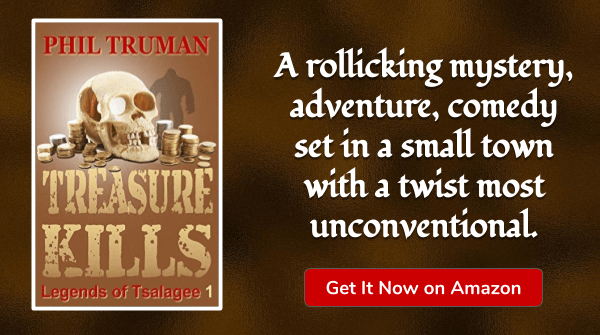 When the murder of a local farmer—a man rumored to have information about the location of the Lost Treasure of Belle Starr—dumbfounds those in the small burg of Tsalagee, Oklahoma, local legends Hayward Yost and Socrates Ninekiller suspect two renegade bikers who’ve ridden into town. Others in the community are drawn into the mystery – a Wiccan who moves to town to pursue her New Age lifestyle; her bumbling, socially inept boyfriend women can’t seem to resist; a young Iraqi War veteran home to heal his physical and emotional wounds.
Join the romp through this rollicking adventure as a bag full of unforgettable characters pursue the hunt for a real-life legendary treasure; a lost treasure and cursed . . . cursed by a forest demon the local Native Americans call “Hill Man who screams at night.”

What reviewers are saying about Treasure Kills, Legends of Tsalagee:
“Fun story…rollicking good time” “Can’t put it down once you start” “thoroughly entertained by this book – lots of laughs” “characters could live in my hometown” “funniest book I’ve read in ages” “colorful characters and rich prose” “on the edge of my seat with suspense, but laughed out loud at some scenarios” “Carl Hiassen redux” “kept seeing this as delightful movie” “a mystery you may not solve until the end”
Available on Amazon Barnes & Noble Goodreads

LEGENDS OF TSALAGEE is one of the funniest books I've read in a long time. It begins with the murder of a well-liked local farmer but this isn't a traditional crime story. It's part caper novel, backwoods style, and part campfire yarn, the kind you might spin around a crackling fire deep in the woods late at night. The setting is the small town of Tsalagee, Oklahoma. Among its memorable residents are Goat, an ex-con; Punch, a ladies man who is terrified of women; Sunflower aka Sunny, the daughter of Goat and his hippie ex-wife, Squeaky; a couple of ruffians named Red Randy and Threebuck; and Hayward Yost and Socrates Ninekiller, a couple of town elders. Socrates is also a Cherokee and an authority on Hill Man, an eight-foot "spirit being who protects all the living things in the woods." Everyone in town plays a part in this story, which takes off from local lore about outlaw Belle Starr. The legend is that she was murdered by her son, who then stole her robber's loot and hid it in a high cave guarded by the Hill Man. Sunny has possession of an old photo of the town founders. It originally belonged to the murdered farmer and tucked behind the photo is a coded letter with instructions for finding the treasure cave. When the subject comes up at a meeting of the Founders Day Committee, it plants the idea of going after the treasure in more than one mind. Everybody has a different agenda and they all come together in a chapter the author calls "All Hell Breaks Loose." The author spins out the tale to its conclusion in an Epilogue. Separating fact from fiction was impossible in the Old West and never more so than in the wild and wooly days of Oklahoma's Indian Territory. The author makes the usual disclaimer: "This is a work of fiction. Names, characters, places, and incidents are products of the author's imagination or are used fictitiously and are not to be construed as real." However, some basic research indicates that Belle Starr was indeed ambushed and murdered. Suspects included her husband and her son but the case was never solved. In that time and place you just mounted up and rode out, hoping to stay a gallop or two ahead of the law. The Hill Man is the Tsalagi (Cherokee) version of Big Foot. There's an interesting telling of the "bear man" legend at [...] I have never been a fan of dialect but this novel is an exception. I grew up in rural Oklahoma and author Phil Truman captures the speech so perfectly that I hear the words even as I see them.

Visit my Website to get a free preview copy of my up-coming novel “Dire Wolf of the Quapaw”: www.philtruman.com I’m a native Oklahoman, born in the small town of Miami in 1945. Spent most of my life here in the Sooner State, except during my military time and a couple brief sojourns to Texas and Missouri. I earned my bachelor’s degree in English from the University of Tulsa in 1970. As a Vietnam Era veteran, I served with the U.S. Army’s 7th Infantry Division near the Korean DMZ from 1967 to 1968. Fresh out of college I worked as a high school teacher and coach, but transitioned into the business world after a few years where I morphed into an IT geek. Slogged through that grind until ‘retiring’ in 2007 to become a full-time writer. So far, I have four books published, all novels, all set in Oklahoma, present day and past. I grew up in small-town heartland America, and feel very blessed by that. My books, I hope, reflect that. GAME, is a coming of age novel set in the fictional small town of Tsalagee the corrupted phonetic of the Cherokee word Tsalagi – CHA-la-gey). Treasure Kills, Legends of Tsalagee, set in the same town, was/is a branch into a different genre – one of mystery and adventure. Always a fan of westerns, and recognizing Oklahoma’s rich history, I wrote Red Lands Outlaw, the Ballad of Henry Starr, a historical novel in the turn of the 20th Century Indian Territory and based on exploits of that notorious outlaw. That was so much fun I followed-on with West of the Dead Line, Tales of an Indian Territory Lawman, a fictional account of perhaps the greatest lawman of them all: the ex-slave, black American, adopted Creek Indian, Deputy U.S. Marshal Bass Reeves. I’m currently nearing completion on two more novels: Book 2 of the (proposed) Legend of Tsalagee series, and the first short novel of what I’m calling “The Jubal Smoak Mysteries.” With the latter I’m combining my two favorite writing genres: western and murder mystery.

Rapscallions, bikers, and the enchanting inhabitants of Tsalagee, Oklahoma, animate the well-written tale of “Treasure Kills.