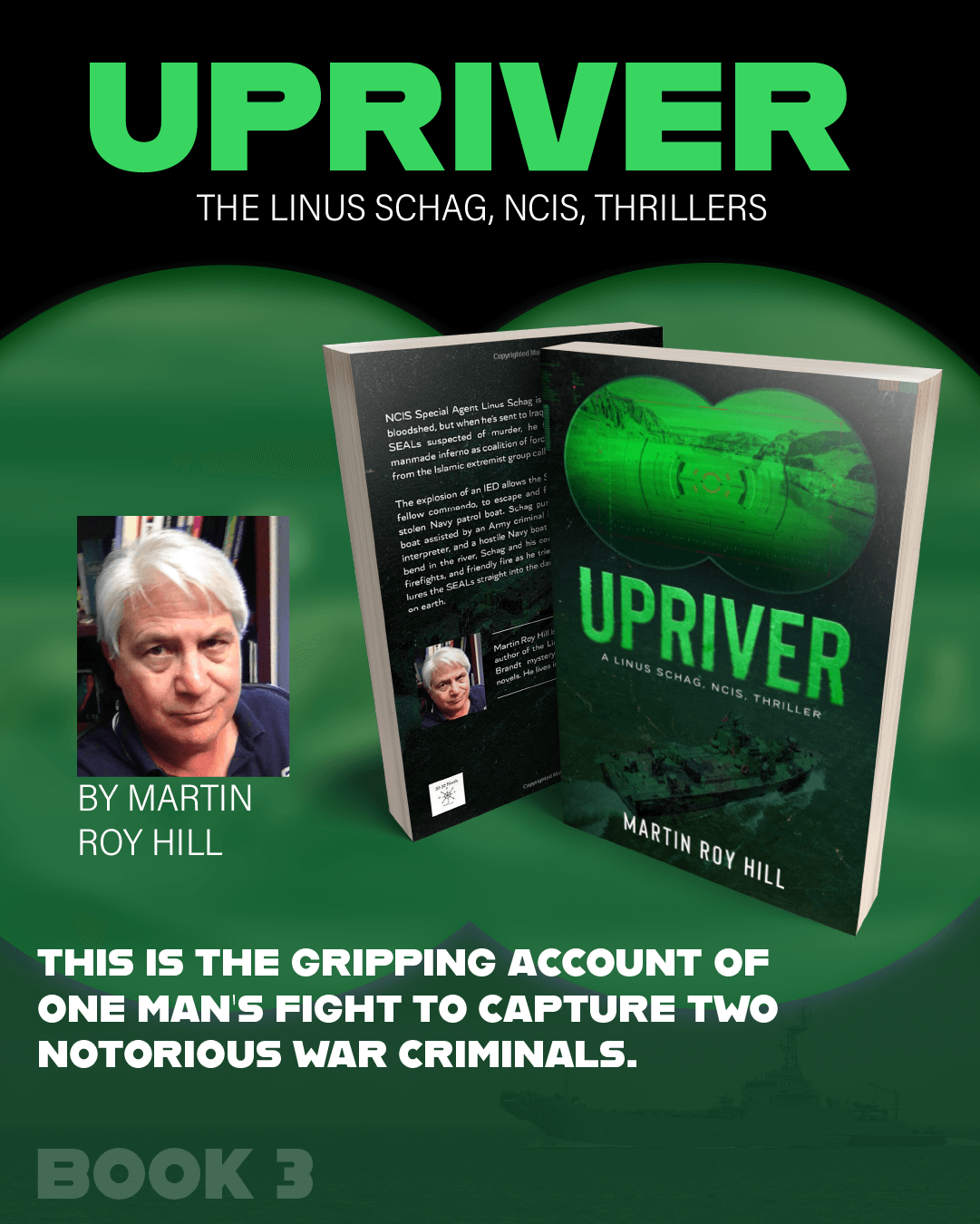 NCIS Special Agent Linus Schag is no stranger to violence and bloodshed, but when he’s sent to Iraq to take custody of two Navy SEALs suspected of murder, he finds himself thrust into a manmade inferno as coalition forces fight to free northern Iraq from the Islamic extremist group called ISIS.

The explosion of an IED allows the SEALs, suspected of killing a fellow commando, to escape and flee up the Tigris River in a stolen Navy patrol boat. Schag pursues the SEALs in another boat assisted by an Army criminal investigator, a vengeful Iraqi interpreter, and a hostile Navy boat crew. Facing danger at each bend in the river, Schag and his companions endure ambushes, firefights, and friendly fire as he tries to discover the secret that lures the SEALs straight into the dark heart of an ISIS-made hell on earth.

About the Author: Martin Roy Hill

Martin Roy Hill has led an eclectic life. Soldier, sailor, journalist . . . well, not a spy, but he has written about them.

Martin joined the U.S. Coast Guard Reserve when he was 19, the same year he sold his first published piece to Reader’s Digest. He spent a total of 13 years as a Coastguardsman, in two tours, involved in small boat search and rescue, emergency medical response, port security, and maritime law enforcement.

In between those tours, he served in a counter-insurgency unit in the U.S. Navy Reserve. After a final stint of Coast Guard active duty following the 9/11 attacks, Martin was offered a commission as a medical service corps officer in a component of the California National Guard, where he trained combat medics for Iraq and Afghanistan. Later, Martin converted to the military police, retiring in 2016 as a major and executive officer of an MP unit.

Martin also served as a wilderness medic and operations sergeant with the San Diego County Sheriff’s Department Wilderness Search and Rescue Detail, where he was cross trained as a tactical (SWAT) medic. Martin also spent several years as a medic and security specialist with a federal Disaster Medical Assistance Team.

Martin received a bachelor’s degree in journalism from CSU Dominguez Hills, and spent more than 20 years as a writer and editor for newspapers and magazines. His investigative reporting earned him numerous journalism honors, including two William Allen White Awards. His stories were included in three of the Investigative Reporters and Editors’ annual compilations of the best investigative reporting. He also worked as a freelance correspondent for LIFE and Newsweek.

After serving on active duty following the 9/11 attacks, Martin switched careers, becoming a U.S. Navy analyst in combat casualty care, a position he held for 16 years.

Between his military, public safety, and journalism careers, Martin experienced many adventures. In the Coast Guard, he participated in dozens of rescues, chased Russian spy ships and smugglers, protected dignitaries, and once was nearly lost at sea in a storm. In the Navy, he was assigned to liaison with a USCG patrol boat during war games, and ended up participating in what at the time was the largest drug bust in U.S. history.

He’s been known to jump out of a perfectly good airplane, and once followed a migrant trail from the U.S. into Mexico (at that country’s request) to locate the remains of a woman who died along the trail so the smuggler leading her group could be prosecuted for her death. As a journalist, he covered disasters, air crashes, wild fires, as well as national and international leaders.

Martin’s background plays a significant role in his writing, which many reviewers have noted has a sense of realism not often found in fiction. His first book, DUTY, a collection of short stories centered around national service, was named the 2012 Best Short Story Anthology/Collection by the San Diego Book Awards Association. His novel, The Butcher’s Bill, received the Best Mystery/Suspense Novel of 2017 from the Best Independent Book Awards, the Clue Award for Best Suspense Thriller from the Chanticleer International Book Awards, the Silver Medal for Thrillers from the Readers Favorite Book Awards, and the award for Adult Fiction from the 2018 California Author Project.

Martin is a professional member of the Mystery Writers of America, Sisters in Crime, and International Thriller Writers.