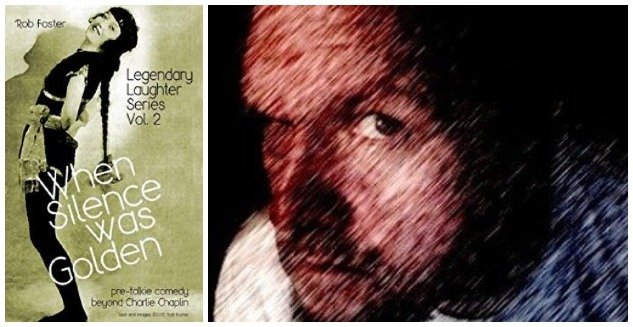 Most people think only of Charlie Chaplin when someone mentions “silent movies.” We’ve forgotten that there were many other funny people in the silent days and even superstar comedians before Chaplin!

“When Silence Was Golden ” is a bold collection of essays focused on the lives of the great silent comedians who populated Hollywood but have sometimes been overlooked in film history from having to thrive in the shadow of Charlie Chaplin’s fame.

Intriguing chapters include comprehensive looks at Mabel Normand, Harry Langdon, and Larry Semon, among others. Also included is a fresh take on the infamous Fatty Arbuckle scandal that rocked the nation early in the 20th century – our first major “media-circus!”

“When Silence Was Golden” is a splendid addition to other silent film star biographies in the libraries of fans, and anyone who loves to laugh.

The Legendary Laughter Series highlights classic comedy from the silent era to the television age, engagingly written, revealing the stories behind the laughs – by a lifelong student of the great lawmakers and a fellow practitioner of comedy.

Relax, pull up a whoopie-cushion, and enjoy!
Available on Amazon

“When silence was golden”

A great book on the early silent days in Hollywood. Lots of good info on the great stars of that era.

Rob Foster is, in addition to a lifelong comedy fan, an award-winning independent filmmaker, cartoonist, writer, actor, producer, director, and grand prize winner of the 2005 “Aristocrats” joke contest. He is a classic comedy aficionado and bloggist, and author of six stage plays including “The Last Stand of Ambrose Bierce” produced in 2001, and a 2004 serio-comic biographical tribute to the most important stand-up comedian of the 20th century, Lenny Bruce, entitled “Mr. Bruce, Do You Swear?” He currently resides in central California.