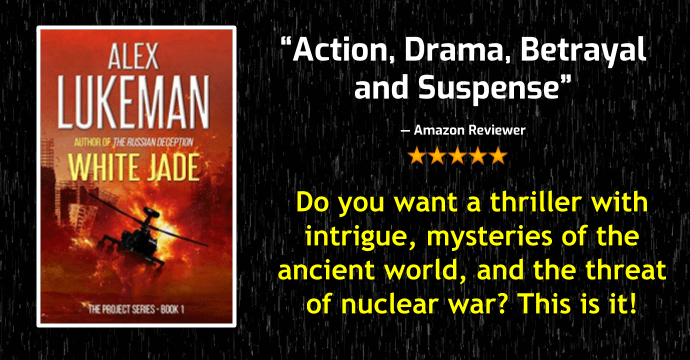 WHITE JADE spins a web of deceit and murder across the globe against the backdrop of a deadly international power game.

Former Recon Marine Nick Carter is a man with a dark history of emotional and physical scars. He works for the PROJECT, a covert counter-terrorism unit reporting to the President. Selena Connor is a beautiful, strong and skilled linguist. When her wealthy uncle is murdered by someone looking for an ancient book about the elixir of immortality, she’s thrown into Nick’s dangerous world.

Nick is assigned to protect Selena and help her recover the missing text. It’s the beginning of a life and death adventure that covers the globe. Someone is determined to take over China and attack America–and Nick and Selena are right in the line of fire.

International intrigue, terrorist acts, and the threat of nuclear war form the core of this fast-paced thriller, the first volume in a series featuring Nick, Selena and the PROJECT.

“Another thriller free from kindle.”


This is a new series another techno thriller with a little Indiana Jones thrown in for fun. Well written good charictor development I liked the heroes kind of disliked the bad guys. No real suprises in the book it follows the same style as most thrillers. It’s ok and the price is right another free kindle book. If you are looking for easy to read escapism try it.

Alex Lukeman writes action/adventure thrillers featuring a covert intelligence unit called the PROJECT and is the author of the award-winning Amazon best seller, The Tesla Secret. Alex is a former Marine and psychotherapist and uses his experience of the military and human nature to inform his work. He likes riding old, fast motorcycles and playing guitar, usually not at the same time. You can email him at alex@alexlukeman.com. He loves hearing from readers and promises he will get back to you.