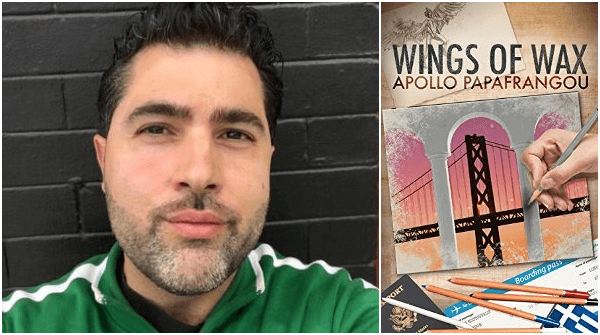 Aspiring Illustrator Angelo Koutouvalis is known for his near-flawless sketches, yet he can’t seem to render the picture-perfect life he desires. At twenty-four, he lives at home with his loving yet overbearing mother and grandmother and struggles to meet women, all while relying on the often humorously ineffectual advice of his few friends and attempting to find a place for himself within the San Francisco Bay Area Greek community.

Angelo believes the secret to gaining fulfillment lies in traveling to Greece for a reunion with his estranged father, who can hopefully pass on the mysterious ways of the kamaki–the classic Mediterranean ladies’ man. But first, Angelo must find a way to overcome his crippling fear of flying.

A course of misadventures–chaotic employment at an exotic bird shop, a disaster of a date with a coworker, and a close encounter with a stripper–leads Angelo to Greece. During an excursion around the Peloponnesian peninsula, which takes him from the ancient theater of Epidavros to the majestic Lion Gates among the ruins of Mycenae, Angelo, emboldened by the ties to his ancestry, finally has it out with his father and learns the startling truth of the man behind the myth.

Rife with references to Greek-American culture and Oakland color, WINGS OF WAX evokes the work of Sherman Alexie and Junot Diaz in its tragically comedic scope of ethnic life and modern masculinity in America.
Available on Amazon Goodreads

In ‘the coming of age’ novel, Wings of Wax, by Apollo Papafrangou the reader meets a young college student of Greek descent living in the San Francisco Bay area. Like many men in their late teens and early twenties, he is insecure, lacks confidence and is often awkward, particularly amongst women. What Angelo doesn’t recognize is that he’s a diamond of many facets waiting to shine. He’s stifled by his mother, embarrassed by his grandmother’s raw outbursts, held back by a condition he considers a handicap, and lives in the shadow of a father whose reputation as a ladies’ man is legendary. Angelo isn’t sure where he fits into the world. His American friends call him ‘The Greek.’ His Greek acquaintances think he’s not Greek enough. As a Greek American myself, I can relate to this. It’s a balance you’re always teetering. But Angelo has ignored his Greek roots, until now, when he made the decision to reconnect with his church, the Greek community and his estranged father. Angelo’s personal discovery is relatable to any ethnic background. Once old insecurities are shed and truths are brought to light, he can soar freely to his chosen future. Papafrangou expresses, through detailed character development and description, the beauty of Angelo’s psychological journey as well as his physical one through Greece, the land of his heritage. Throughout the book my heart would break for Angelo each time disappointment found him and I would root for him to find the confidence he needed. But this was in no way a depressing book. It was full of life and Papafrangou gave me comic relief in the form of Angelo’s yiayiá – his grandmother. She would make the most outlandish comments, so much so, I found myself laughing out loud. This was an enjoyable book. Maybe more so for me, who felt at home with the Greek expressions and colorful personalities.

Apollo Papafrangou is a graduate of the Mills College Creative Writing MFA program, and is the author of WINGS OF WAX. He attributes his passion for storytelling to being raised in a Greek-American household where the epics of his ancestors were combined with contemporary family lore. If he wasn’t an author, Apollo would be a singer-songwriter under the moniker Greek Lightning, wooing audiences with stormy R&B ballads. Apollo lives in Oakland, CA.

Dear Reader, author’s recently published book “Wings of Wax” is now available on leading bookstores, get your copy now and help the author by writing a review of the book.
Available on Amazon