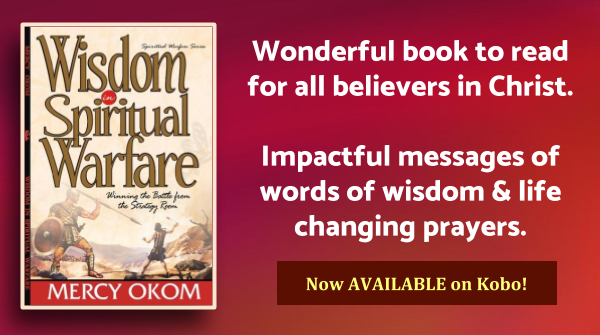 WISDOM IS BETTER THAN WEAPONS OF WAR!

The church has serious opposition and contenders, which the Bible refers to as the “Gates of Hell”. When the Scriptures command ‘gates’ to be lifted for the KING of GLORY to enter, it connotes warfare, struggle, and confrontation. There is the need to be sensitized that we live in a perpetual battlefield or War Zone.

Warfare is a fierce battle, and to engage in it, you must do so with wisdom to avoid injuries or death. Wisdom is a defense, better than strength or weapons of war. That is why it is important to apply Divine wisdom in life’s battles.

The purpose of this book is to alert believers to stand firm in Truth, to take their place in Heavenly places with Christ, to decree decrees, and above all, to carry on with Divine wisdom and direction.

Though the war is fought on the battlefield, it is won from the strategy room.


There are some spiritual books you read and you forget the contents, while there are some you read and it immediately gives you a heavenly encounter. Wisdom in spiritual warfare is one of those books!! Every word has the ability to fuel you for battle!! Every word makes you see more reasons why you should get up and fight for what you truly deserve , not just to fight but to fight the right way, using the right weapons and strategies. I highly recommend this book to every soldier in God’s army