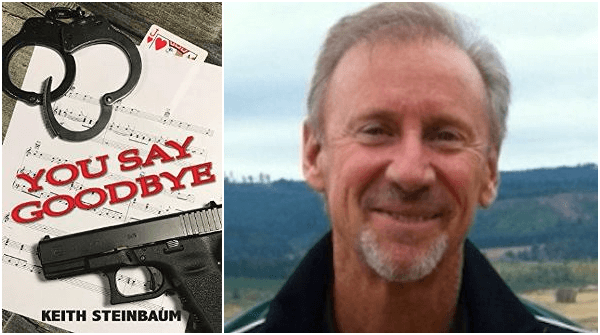 After a temperamental meltdown on stage, Sean Hightower, a regretful and resentful “one-hit wonder” rock musician hoping for a comeback, returns to his girlfriend’s condo seeking comfort from the woman he loves. But after letting himself in, he discovers her naked body on the bed, murdered from a bullet to the head. When the police detective arrives and sees the two taped pieces of paper on the wall with the word, “hello,” on one and “goodbye,” on the other, he realizes that the renowned serial killer, The Beatles Song Murderer, has struck again. In the days that follow, he reaches another conclusion—the Beatles Song Murderer is probably somebody Sean knows. Now the detective needs Sean’s help to find the killer.
Available on Amazon Barnes & Noble Kobo Goodreads

More than a murder mystery... I thoroughly enjoyed Keith Steinbaum’s book, YOU SAY GOODBYE. This is a book that, on the surface, is a murder mystery, but in a deeper sense, explores the ups and downs – the joy and the pathos – of life. The story is about a rock musician, Sean Hightower, who is desperately seeking to replicate his one big hit, “Looking Glass”. Turned 50, twice divorced and working at his father’s used car dealership, he is consumed with the depression of failure, finding happiness only with his girlfriend colleague, Merissa. When he returns one evening to find her brutally raped and murdered, with the words “Hello—Goodbye” on the wall behind the corpse, he is driven to contemplate suicide. However, these words connect the murderer first to a Beatles song and thence to the Beatles song murderer who has already raped and killed seven women prior to Merissa. The attending detective suggests the murderer is someone Sean and Merissa know. The book depicts how Sean is gradually pulled out of his suicidal depression by his determination to help find his girlfriend’s murderer and by his connection to a young neighbor who is bravely fighting cancer. Sean’s admiration of the exemplary courage of this little girl, Kayleigh, becomes a key factor not only in his finding a new purpose in life but also in the final resolution of the mystery. The plot is well constructed and although there are a number of clues that emerge and point to possible suspects, the identity of the murderer is a well-kept secret until the end. The characters are diverse and well constructed. The writing is flawless. The one thing I might have done differently is edit out some of the description of the daily humdrum of Sean’s existence which tends to slow down the pace of the plot. All in all, this is a good read and highly recommended. No doubt there will be more of the same from Keith Steinbaum.

“Many of us are driven to write through experiences born from pain, generating a need to uniquely express our own inner turmoil. Light-hearted inspiration is certainly an enviable reason to tap into one’s creative juices, but those feelings don’t stimulate the kinds of thoughts that lodge within me and grow in complexity. I can pinpoint a tragic, life-changing event occurring in my mid-teens that transformed me into a writer, and it seems that the weightier side of life continues to be my motivation.” -Keith Steinbaum From years of writing poetry, to a decade as a scratching-of-the-surface professional song lyricist, I eventually branched out towards a desire to write a novel, culminating in the completion of my first book, “The Poe Consequence.” Here’s the premise of the story: After the death of an innocent bystander in a drive-by shooting, the two gangs responsible for his murder soon face an Edgar Allan Poe inspired vow of revenge from beyond the grave. THE POE CONSEQUENCE: BOOK EXCELLENCE AWARD FINALIST Winner of Books-And-Authors.net’s Book of the Year in the Supernatural Thriller genre, “The Poe Consequence” was also recognized as one of the top Indy books of the year by Kirkus Reviews as well as receiving a Finalist placing in Book Excellence Awards International Competition for 2017. The novel has now been signed with Black Opal Books for a re-release scheduled for March, 2020. It’s currently available as an audiobook through Audible.com and Amazon.com. YOU SAY GOODBYE: BOOK EXCELLENCE AWARDS FINALIST TOP REVIEW RANKING FROM READERS FAVORITE HONORABLE MENTION PLACING IN THE INTERNATIONAL READERS’ FAVORITE COMPETITION TOP REVIEW RANKING FROM ONLINEBOOKCLUB.ORG My second novel, a Beatles-themed whodunit murder mystery entitled “You Say Goodbye,” was released on February 23rd, 2019 through Black Opal Books. As with The Poe Consequence, You Say Goodbye received a Finalist placing in the Book Excellence Awards International Competition – this time for 2019. It also received an Honorable Mention placing in the international Readers’ Favorite competition, finishing in the Top 8 votes among hundreds of entries. The story centers around a ‘one-hit wonder’ ex-rock ‘n roll star and a little girl fighting cancer who is a big fan of the Los Angeles Lakers. And, through it all, the search for a renowned serial killer. Here’s the premise of the story: The murder of an ex-rock star’s girlfriend leads a detective to conclude that the perpetrator is not only a renowned serial killer, but probably somebody the singer knows.

Like his first book, there are subtle morals to be learned from the book, but not so much that they get in the way of the actual storyline.

Dear Reader, author’s recently published book “You Say Goodbye” is now available on leading bookstores, get your copy now and help the author by writing a review of the book.
Available on Amazon